Pin It As my son's birthday is approaching, I was looking back at pictures of his birthday part last year and was inspired to share this upcycling idea. 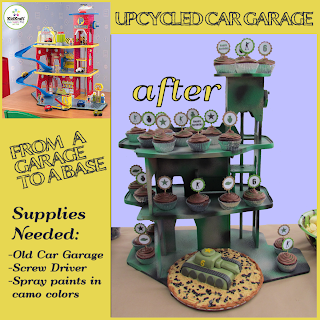 He was reeeeally into army everything last year.  We had buckets full of little green army men and our living room floor was often the stage of many battles.  Since both of my youngest are January birthdays, November is often a time when I start going through and weeding out forgotten toys before Christmas and their birthdays.  I wanted to put his old Parking Garage

in the donation pile because he never played with cars anymore but he did sometimes use it for his battles.  Then it hit me.  It would be transformed into an army base. Pin It
Posted by Anna Swartz at 11:18 PM